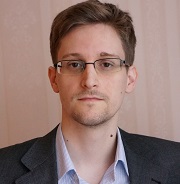 Edward Joseph Snowden is an American former computer intelligence consultant who worked for National Security Agency (NSA) in USA. Later he decided to leave the agency to inform the public of the ugly truth behind the NSA. In 2019, Snowden released his memoir, Permanent Record.

“Better that right counsels be known to enemies than that the evil secrets of tyrants should be concealed from the citizens. They who can treat secretly of the affairs of a nation have it absolutely under their authority; and as they plot against the enemy in time of war, so do they against the citizens in time of peace.” ― Baruch Spinoza

It hasn’t been a month since President Biden mounted the steps of Philadelphia’s Independence Hall, declaring it his duty to ensure each of us understands the central faction of his political opposition are extremists that “threaten the very foundations of our Republic.” Flanked by the uniformed icons of his military and standing atop a Leni Riefenstahl stage, the leader clenched his fists to illustrate seizing the future from the forces of “fear, division, and darkness.” The words falling from the teleprompter ran rich with the language of violence, a “dagger at the throat” emerging from the “shadow of lies.”

“What’s happening in our country,” the President said, “is not normal.”

Is he wrong to think that? The question the speech intended to raise—the one lost in the unintentionally villainous pageantry—is whether and how we are to continue as a democracy and a nation of laws. For all the Twitter arguments over Biden’s propositions, there has been little consideration of his premises.

Democracy and the rule of law have been so frequently invoked as a part of the American political brand that we simply take it for granted that we enjoy both.

Are we right to think that?

The CIA was founded in the wake of the 1947 National Security Act. The Act foresaw no need for the Courts and Congress to oversee a simple information-aggregation facility, and therefore subordinated it exclusively to the President, through the National Security Council he controls.

Within a year, the young agency had already slipped the leash of its intended role of intelligence collection and analysis to establish a covert operations division. Within a decade, the CIA was directing the coverage of American news organizations, overthrowing democratically elected governments (at times merely to benefit a favored corporation), establishing propaganda outfits to manipulate public sentiment, launching a long-running series of mind-control experiments on unwitting human subjects (purportedly contributing to the creation of the Unabomber), and—gasp—interfering with foreign elections. From there, it was a short hop to wiretapping journalists and compiling files on Americans who opposed its wars.

In 1963, no less than former President Harry Truman confessed that the very agency he personally signed into law had transformed into something altogether different than he intended, writing:

“For some time I have been disturbed by the way CIA has been diverted from its original assignment. It has become an operational and at times a policy-making arm of the Government. This has led to trouble…”

Many today comfort themselves by imagining that the Agency has been reformed, and that such abuses are relics of the distant past, but what few reforms our democracy has won have been watered-down or compromised. The limited “Intelligence Oversight” role that was eventually conceded to Congress in order to placate the public has never been taken seriously by either the committee’s majority—which prefers cheerleading over investigating—or by the Agency itself, which continues to conceal politically-sensitive operations from the very group most likely to defend them.

“Congress should have been told,” said [Senator] Dianne Feinstein. “We should have been briefed before the commencement of this kind of sensitive program. Director Panetta… was told that the vice president had ordered that the program not be briefed to Congress.”

How can we judge the ultimate effectiveness of oversight and reforms? Well, the CIA plotted to assassinate my friend, American whistleblower Daniel Ellsberg, in 1972, yet nearly fifty years of “reforms” did little to inhibit them from recently sketching out another political murder targeting Julian Assange. Putting that in perspective, you probably own shoes older than the CIA’s most recent plot to murder a dissident… or rather the most recent plot that we know of.

If you believe the Assange case to be a historical anomaly, some aberration unique to Trump White House, recall that the CIA’s killings have continued in series across administrations. Obama ordered the killing of an American far from any battlefield, and killed his 16 year-old American son a few weeks later, but the man’s American daughter was still alive by the time Obama left.

Within a month of entering the White House, Trump killed her.

She was 8 years old.

It goes beyond assassinations. Within recent memory, the CIA captured Gul Rahman, who we know was not Al-Qaeda, but it seems did save the life of Afghanistan’s future (pro-US) President. Rahman was placed in what the Agency described as a “dungeon” and tortured until he died.

They stripped him naked, save a diaper he couldn’t change, in a cold so wicked that his guards, in their warm clothes, ran heaters for themselves. In absolute darkness, they bolted his hands and feet to a single point on the floor with a very short chain so that it was impossible to stand or lie down – a practice called “short shackling” – and after he died, claimed that it was for his own safety. They admit to beating him, even describing the “forceful punches.” They describe the blood that ran from his nose and mouth as he died.

Just pages later, in their formal conclusion, declare that there was no evidence of beating. There was no evidence torture. The CIA ascribes responsibility for his death to hypothermia, which they blamed on him for the crime of refusing, on his final night, a meal from the men that killed him.

In the aftermath, the Agency concealed the death of Gul Rahman from his family. To this day, they refuse to reveal what happened to his remains, denying those who survive him a burial, or even some locus of mourning.

Ten years after the torture program investigated, exposed, and ended, no one was charged for their role in these crimes. The man responsible for Rahman’s death was recommended for a $2,500 card award — for “consistently superior work”.

A different torturer was elevated to the Director’s seat.

This summer, in a speech marking the occasion of the CIA’s 75th birthday, President Biden struck a quite different note than he did in Philadelphia, reciting what the CIA instructs all presidents: that the soul of the institution really lies in speaking truth to power.

“We turn to you with the big questions,” Biden said, “the hardest questions. And we count on you to give your best, unvarnished assessment of where we are.  And I emphasize “‘unvarnished.’”

But this itself is a variety of varnishing — a whitewash.

For what reason do we aspire to maintain — or achieve — a nation of laws, if not to establish justice?

Let us say we have a democracy, shining and pure. The people, or in our case some subset of people, institute reasonable laws to which government and citizen alike must answer. The sense of justice that arises within such a society is not produced as a result of the mere presence of law, which can be tyrannical and capricious, or even elections, which face their own troubles, but is rather derived from the reason and fairness of the system that results.

What would happen if we were to insert into this beautiful nation of laws an extralegal entity that is not directed by the people, but a person: the President? Have we protected the nation’s security, or have we placed it at risk?

This is the unvarnished truth: the establishment of an institution charged with breaking the law within a nation of laws has mortally wounded its founding precept.

From the year it was established, Presidents and their cadres have regularly directed the CIA to go beyond the law for reasons that cannot be justified, and therefore must be concealed — classified. The primary result of the classification system is not an increase in national security, but a decrease in transparency. Without meaningful transparency, there is no accountability, and without accountability, there is no learning.

The consequences have been deadly, for both Americans and our victims. When the CIA armed the Mujaheddin to wage war on Soviet Afghanistan, we created al-Qaeda’s Osama bin Laden. Ten years later, the CIA is arming, according to then-Vice President Joe Biden, “al-Nusra, and Al-Qaeda and the extremist elements of jihadis coming from other parts of the world.” After the CIA runs a disinformation operation to make life hard for the Soviet Union by fueling a little proxy war, the war rages for twenty-six years — far beyond the Union’s collapse.

Do you believe that the CIA today — a CIA free from all consequence and accountability — is uninvolved in similar activities? Can you find no presence of their fingerprints in the events of the world, as described in the headlines, that provide cause for concern? Yet it is those who question the wisdom of placing a paramilitary organization beyond the reach of our courts that are dismissed as “naive.”

For 75 years, the American people have been unable to bend the CIA to fit the law, and so the law has been bent to fit the CIA. As Biden stood on the crimson stage, at the site where the Declaration of Independence and Constitution were debated and adopted, his words rang out like the cry of a cracked-to-hell Liberty Bell: “What’s happening in our country is not normal.”

If only that were true.

Each year, in the last weeks of September, the world’s leaders gather in New York City to speak at the

Karel Koecher was a horrible choice to become an intelligence officer for any self-respecting spy service. Born in 1934, he