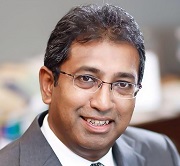 Harsha de Silva is a Sri Lankan economist and politician. He is a member of the main opposition Samagi Jana Balawegaya (SJB) in Sri Lanka.

In the 74 years since our independence, Sri Lanka has achieved much in terms of human development, despite lingering human rights issues and gaps in democratic governance. Yet we have been economically mediocre: our per capita income was only USD 3,815 in 2021 and will be far lower in 2022. We have been left behind by nations that were lagging behind us in the 1960s. Why?

In the 1970s, Sri Lanka followed statist, inward-looking policies while other countries liberalised markets and integrated globally. After liberalising in 1977 and 1988, subsequent leaders did not allow markets to function efficiently: they postponed essential reforms, took short-sighted decisions for political gain, and allowed crony capitalism to prosper. Every post-independence administration ran fiscal and current account deficits and used welfare politics to win votes. The 2003 attempt to bring fiscal discipline was thwarted by weakening the Fiscal Management (Responsibility) Act. In 2016, the coalition government attempted to reverse this trend with International Monetary Fund (IMF) support: it entered a disciplined revenue-enhancing fiscal consolidation program and registered a primary account surplus for the first time in decades. Yet key reform items (e.g., rationalising border tariffs, unbundling utilities, revamping foreign direct investment (FDI) policy, entering into regional trade agreements) were abandoned due to ideological clashes between the coalition parties, so external debt continued to grow.

The onset of the Covid-19 pandemic in 2020 and the complete closure of national borders caused a major external shock to the economy, demolishing forex inflows through tourism. The Russian invasion of Ukraine in 2022, and the global supply chain crisis it prompted, exacerbated our crisis.

The Gotabaya Rajapaksa government subjected the economy to two major, unnecessary, policy shocks: Firstly, it implemented unprecedented tax cuts in December 2019, based on a wrong interpretation of ‘Modern Monetary Theory’. This wiped off one third of government revenue (estimated LKR 600 bn in 2020) and caused a high budget deficit, which was financed with printed money. Sovereign rating agencies immediately downgraded Sri Lanka’s outlook, affecting our ability to access private credit markets. Secondly, the administration implemented an overnight ban on imported chemical agricultural inputs, which resulted in the harvest falling by one third to half of usual output, depending on the crop. This caused an unprecedented produce shortage and increased import reliance.

This government treated the looming crisis as a temporary liquidity shock due to the pandemic and ignored the systemic issues of solvency. They thus took short-term actions such as quantitative import restriction and forex restrictions on current account transactions, sought short-term financial support via swaps from Bangladesh, India, and China, and financed essential imports from supplier credit and foreign exchange reserves.

Misguided exchange and monetary policy put the final nail in the coffin. The government used forex reserves to repay debt and defend the pegged exchange rate at around LKR 200/USD, draining Sri Lanka’s reserves from USD 7.6 bn in end-2019, to less than USD 50 mn in April 2022. The Central Bank of Sri Lanka (CBSL) took the contradictory policy of artificially holding interest rates as well as exchange rates, putting further pressure on the rupee. The CBSL printed money nonstop, resulting in the broad money supply increasing 41% between January 2020 and December 2021. Blackmarket rates for forex rose rapidly, at a 30% premium of the official rate. Exporters held dollars abroad and remittance inflows dried up to less than 40% of usual values.

After 18 months of denial, the CBSL abandoned the LKR 200/USD rate on 7 March 2022, and since they did not sequence the adjustment (e.g., relaxing import and forex transaction restrictions), the market exchange rate plummeted to LKR 365/USD by July 2022. The black-market rate of the dollar continues to trade at 10% over the official rate. The weak rupee meant that the price of all goods and services would inevitably shoot up.

This government treated the looming crisis as a temporary liquidity shock due to the pandemic and ignored the systemic issues of solvency.

The consequences: A predictable but terrible crisis

This economic catastrophe is therefore no surprise. But what has it resulted in?

Sovereign insolvency: In April 2022 Sri Lanka announced unilateral suspension of all external debt repayments (apart from multilateral debt), signaling bankruptcy for the first time since independence. The government has run out of forex and is unable to open letters of credit for essential imports.

Inflation, criticalshortages, and a national shutdown: Inflation is at unprecedented levels for almost all goods and services. Lack of forex for fuel resulted in 12-hour power cuts due to power plant closures and fuel queues that are kilometers long. Private and public transport has been decimated, so schools and government offices have closed. Agriculture, fishing, and industry cannot function. Other essential items such as medicine and food are also facing shortages and inflation, affecting the average person’s daily subsistence. More than 15 people have died in fuel queues, and there have been incidents of parents unable to feed their children committing suicide. Crime has increased and shortages may result in further breakdown of social order.

Political crisis: The public demanded leadership change, especially President Rajapaksa’s resignation – hence the cry, “#GotaGoHome.” On 31 March, there were protests outside his private residence. Despite emergency laws, a 36-hour curfew, and a social media ban, crowds reiterated this call across Sri Lanka on 3 April, causing the Cabinet including Basil and Namal Rajapaksa to resign. Protestors established ‘Occupy’-style protest sites outside the Presidential Secretariat in Colombo (GotaGoGama), and around the island. On 19 April, the police killed a protester in Rambukkana. On 9 May, goons from the Prime Minister’s (PM) official residence attacked GotaGoGama, prompting counter-violence from protestors. A ruling party Member of Parliament (MP) and his security officer were killed, and some 50 government MPs’ properties were burnt down. Mahinda Rajapaksa resigned as PM. The President falsely promised constitutional reform and appointed Ranil Wickremesinghe, the sole representative of the United National Party in Parliament, as the new PM. On 9 July, enormous crowds gathered in Colombo despite the lack of transportation and stormed the President’s and PM’s official residences. PM Wickremesinghe’s private residence was torched. President Rajapaksa fled the country, and finally resigned on 15 July. PM Wickremesinghe took oaths as interim President and was elected President by Parliament on 20 July, despite protestors rejecting his leadership as being proxy for the Rajapaksas. Sri Lanka is under a dark cloud of upheaval and uncertainty.

Though our economic position is dire, there is a way out of the crisis through reforms in ten key areas, which this document outlines. As this is not a holistic policy manifesto, it does not address important reform areas such as health, education, reconciliation, and climate protection: it is simply a blueprint for economic salvation and survival.

The ten pillars of reform:

BEYOND SURVIVAL: THE FOUNDATION OF PROSPERITY FOR ALL

A Social Market Economy Philosophically, we believe in a social market economy: a synthesis between economic liberalism emphasising individual freedom and autonomy, and political freedom emphasising equity and justice. In this context, we must drive market competition and competitiveness while providing public support and social protection. We firmly believe that market competition is the key to economic success of the individual and the economy; yet we know that this requires regulation and assistance.

To attain long-term development sustainably, opportunities should be offered to all citizens, and they should be empowered to harness these opportunities for their wellbeing. The government should actively facilitate and ensure this, by building an appropriate knowledge and information base, and maintaining proper economic policy, governance, law and order, and property rights. We believe economic growth is central to poverty alleviation. Compelling evidence from around the world shows that outward-oriented growth is more ‘pro-poor’ and effective at reducing poverty than statist, inward-oriented strategies. Our own economic history illustrates this well.

Yet we know that growth does not provide every need in poverty alleviation: the government must combine growthpromoting policies with a well-targeted social safety mechanism. Building a strong, transparent, and equitable social welfare system is an integral part of our development strategy: this facilitates achieving shared growth and makes difficult economic reforms palatable. That is why we believe in the total transformation of welfare politics, so that the subsidy is provided to the consumer directly rather than to the supplier of the service, which is then consumed mostly by the rich. Paraphrasing the economist Jagdish Bhagwati, although growth “opens the doors” for everyone, some people have starting lines further back than others – their government should help them over the threshold.

In mid-September, for just a few days, Indian industrialist Gautam Adani entered the ranks of the top three richest people

The Central Bank as an Organization

Following excerpts adapted from Tumultuous Times: Central Banking in an Era of Crisis by Masaaki Shirakawa published by Yale University

For the first time after 30 years, Sri Lanka will start exporting ilmenite from Trincomalee port. This ilmenite export to