We are not planning to annex any part of Palestinian territory but we are planning to claim our sovereignty,” Director of Foreign Affairs at Israel’s Likud Party, Eli Vered Hazan said. Joining by Nilantha Ilangamuwa, former editor of Sri Lanka Guardian, from his house in Jerusalem, Mr Hazan, a strong supporter of Prime Minister Benjamin Netanyahu has tried to justify every action of the incumbent government which is under fire due to a series of protests in locally and internationally as well as lack of majority in the Knesset. However, Mr Hazan did not hesitate to give us his frank opinions on reports issued by the international community including, The United Nations over Israel and President Donald Trump’s favourable policies on Israel.

Mr Eli Vered Hazan is also a lecturer at the S.I.D College and a regular guest and contributor to Israeli and international news channels.‏ He has served as an adviser to the Minister of Education; a Parliamentary adviser to the Chairman of the Likud faction and the Coalition; and a publicist for Israel Hayom Newspaper. Studied at the Hebrew University of Jerusalem, Eli has completed a German language course at the University of Vienna, Austria.

“Returning our Diamond will make us believe that Britain is remorseful for the exploitation of our people and our resources,” Vuyolwethu Zungula who is

Interview: We Are Eelam Tamils

Sri Lanka will not become an economically viable country without a political resolution to the demands of Eelam Tamils, Visuvanathan Rudrakumaran a New York-based

I once asked my younger son if he could pass the salt, only to be met with the response, “Of course I can!” When 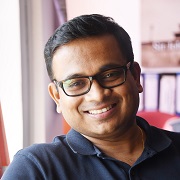 The author is a founding editor of the Sri Lanka Guardian and has been the editor until 2018. The views expressed in this article are his own and do not reflect the official policy or position of any other organisation or employer he is affiliated to.

Interview: We Are Eelam Tamils