Recall the origin of the G20? The G7 had winnowed down to represent a very narrow slice of the financialised élite economy — whilst the global ‘things’ economy had grown to outsize the monetarised western one. Obama wanted to pull in more of these ‘other’ economies under the US’ skirt and into its ‘regulatory parameters’, and so the G7 became the G20.

At bottom, it was, and is, all about actuating a US-led economic ‘coalition of the willing’, versus a non-compliant (and sanctioned) rest of the world: i.e. about bringing a large slice of the world to conceding the ‘Washington Consensus’ tutelage.

But, this spectacularly did not happen at Bali.

Well, not only did the G7 fail to get the wider G20 to condemn Russia over Ukraine, or to insert a wedge between China and Russia, but rather, the Manichean offensive targeting Russia produced something even more significant for the Middle East than the paralysis and lack of tangible results, described by the media.

It produced open defiance of the western order. It spurred pushback.

The Chinese opposed every one of the attempts to divide China from Russia. And the non-condemnation of Russia was supported by Argentina, Brazil, China, India, Indonesia, Mexico, Saudi Arabia, South Africa, Turkey, and Russia. Yes, it is what it is: an epochal revolt against the binary ‘with us or against us’ hegemon, at the moment that the world political ‘map’ is on the move — and as the rush towards BRICS+ gathers pace.

Why does this revolt matter so particularly for the Middle East? Well, firstly, such defiance — ‘we are not ‘party to your squabbles’ — matters for all states and everywhere — for Africa and the Global South too. But for the Middle East, it has a specific poignancy — which is its particularity of having a castellated Israel in its midst.

What is the fortress’ mightiest weapon?  It is not the nuclear one because, as we have seen evidenced in Ukraine, Russian hypersonic high-precision missiles have made tactical nukes look like a lumbering elephant — unnecessarily stamping a whole forest into ground-débris, in its effort to take out a single hard-to-reach coconut tree.

No, “Israel’s” ‘weapon’ has been the readiness of a ‘fat tail’ of disparate ‘western allies’ to conform to Washington’s instruction and act as its enforcer.

The fact that politically heavyweight states, such as China, Russia, Iran, Turkey, Saudi Arabia, and India, very deliberately thumbed their nose at western threats and menace of sanctions at Bali does not signify the end to “Israel’s” deterrence, but perhaps the beginning of the end?

It is difficult to overplay the importance of this loss of compliance for “Israel”. The peril of US Treasury ‘N-bomb’ sanctions has been at the heart of induced ‘fat-tail’ compliance. But now, Russia, China, and Iran have been charting a clear path out from this thorny thicket, through dollar-free trading.

Military deterrence has constituted the secondary pillar to the architecture of mounting an allied coalition of dependency. But even that – though not gone – is lessened.

In essence, smart cruise-missiles, drones, electronic warfare and – now – Iranian hypersonic missiles, have capsized the paradigm. So too, has the game-breaker event of Russia joining with Iran as a military force multiplier. US ‘deterrence’ itself now faces a deterrent!

The western ‘Iran containment mechanism’ (known as the JCPOA) paradoxically was ‘holed on the rocks’ of US Senate dysfunctionality and obstruction. The Washington hawks’ ‘last throw of the dice’ — of throwing the MEK and Kurds into the Iran cauldron in the desperate hope of regime change — is being deftly managed by Tehran to allow “the protests” to exhaust itself.

The Russo-Iranian force-multiplier relationship, The Jerusalem Post opines, “provides proof that the two states … together – are better equipped to make good on their respective ambitions – to bring the West to its knees”.

Well … the ‘West on its knees’ is one thing. More to the point is where then would that leave an “Israel” already culturally estranged from a wokish Team Biden? Does this mean that “Israel” would see no alternative but to ‘go to the end’ — to seek some existential victory (‘crushing the shoots’ as the Jerusalem Post authors advocate, before they consolidate)? Or, does “Israel” decide the ‘war of the Global Order’ is not its affair and open talks with Moscow on a new security architecture for the Region?

To fully understand the anxiety lying behind The Jerusalem Post opinion piece, we must first grasp that the geography of the ‘shifting map’ towards a BRICS+ — to new corridors, new pipelines, new waterway and railway networks — is but the outer mercantilist layer to a nesting Matryoshka doll. To unstack — to the inner doll layers — is to espy a foundation of radical ethos.

What is its inner meaning? An anecdote; not in itself significant when taken in isolation, yet suffused with symbolic content for those who are alert to symbolic meaning.

Lately, in north-east Syria, the Syrian Army periodically have been mounting roadblocks and refusing passage to US military convoys on their way to and from their Kurdish protégé allies. In the last days, a checkpoint that turned-back a US military convoy was jointly manned by both Syrian and Russian forces.

So what? Where is the radical symbolism in that?

The symbolism is that all the Russian vehicles at the north-east Syria checkpoint had a huge white ‘Z’ painted on them.

‘Z’ of course is the symbol painted on Russian vehicles deployed in Ukraine to identify those forces that are fighting the massed NATO forces embedded with, and serving auxiliary to the Ukrainian armed forces fighting Russia there.

But the mysterious white ‘Z’ painted on vehicles has come to symbolise something more: It is seen to represent “World Order Z”– all those countries and peoples who jointly are choosing a path of ‘defiance’ and national renewal.

A large ‘Z’ represents the spirit of resistance and banner around which gather those who support this movement. It says of those who do: ‘We are all ‘Z’ now’. 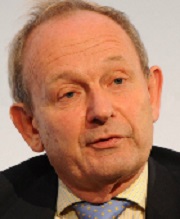 Alistair Crooke, is a former British diplomat and is the founder and director of the Beirut-based Conflicts Forum, an organisation that advocates for engagement between political Islam and the West.