Few things annoy or worry New Delhi more than the news that China is showing off its presence and power in the Indian Ocean region around India. The docking of Chinese tracking ship Yuan Wang 5 at the Hambantota port in Sri Lanka for replenishment has ruffled New Delhi’s feathers. For, its arrival in Hambantota could signal at least a diplomatic victory for Beijing in the strategically pivotal Sri Lanka in the Indian Ocean, and one of India’s closest neighbours.

Two points stand out. First, China paid one of its rare compliments to India for its recent economic help to Sri Lanka. India has given $3 billion in assistance in the form of a line credit at a time when Colombo has virtually declared insolvency and defaulted on all foreign loans, including those from China, which amount to $51 billion. China itself has announced $74 million in assistance for the supply of essential goods.

But, it is silent about Colombo’s request to defer loan repayments as well as its earlier announcement to consider a $2.5-billion loan facility for Sri Lanka. China is not alone; even the World Bank will not offer a clumsy Sri Lankan Government financial help on the grounds of inadequate macroeconomic policy framework.

Significantly, Beijing does not worry much about being outsmarted by India in Sri Lanka because it is probably calculating that China can prevent India from reaping political and economic advantages by bestowing economic largesse on Colombo. China has built up a sturdy economic and military relationship with Sri Lanka since the outbreak of the country’s civil war in the mid-1980s. So, any strengthening of Sri Lanka’s economic ties with India is likely to have more ups and downs than Colombo’s relationship with Beijing.

In 2019, the value of cumulative Chinese infrastructure investment in Sri Lanka was equivalent to 14 per cent of Sri Lanka’s GDP (nearly $84 billion), surpassing India’s comparable $1.2 billion in investment.

Over the last year, India has managed to get important projects in Sri Lanka. For instance, the Indian Oil Corporation clinched an important deal on developing the oil tank farm in Trincomalee in northeastern Sri Lanka. Last March, Sri Lanka and India also signed an agreement to develop a 100-megawatt solar power plant in Trincomalee district.

However, Sri Lankans are suspicious about Indian aid. Socialist parties fear an increase in New Delhi’s power over Colombo and its impact on Sri Lanka’s sovereignty. In part, this is because Colombo will not be able to repay loans for a long time.

Meanwhile, all Sri Lankan parties are aware that China will continue to exploit Sri Lanka to advance its own interests. At another level, it would be wrong to harp on China’s debt trap diplomacy in Sri Lanka. Theories about debt-trap diplomacy need rigorous questioning. Eurobonds comprise the largest chunk — 36 per cent — of Sri Lanka’s sovereign debt. China’s share is between 10 and 20 per cent. So, China is not the money-snatching villain masterminding Sri Lanka’s economic crisis.

The fact is that an inept Sri Lankan Government has failed to pay the debts it owes China. Whether China will, therefore, try to control strategically vital ports like Hambantota, which it developed as a ‘replacement’ of sorts to expand its geopolitical influence, is an open question. It is also difficult to ascertain whether China’s interest in Hambantota is driven by its ambition to establish a naval base along strategic shipping lanes in the Indian Ocean. What is worth remembering is that the development of Hambantota was financed by Chinese loans on the initiative of Colombo.

Nevertheless, whether accusations about China’s strategic designs on Hambantota might be right or wrong, the Yuan’s visit aroused New Delhi’s fears that Beijing is trying to militarise Sri Lanka.

Whether Beijing will do this, given that the China-friendly Gotabaya brothers both resigned from government earlier this year, is also questionable. China has not responded to Sri Lanka’s appeals for more financial support, largely because Colombo lacks enough foreign exchange reserves.

Simultaneously, China is also unwilling to write off its loans to Sri Lanka. Like the western donors, China would rather provide new loans than cancel the old ones.

China is not responsible for Sri Lanka’s mismanagement of its economy but its attitude to the country appears high-handed. But Sri Lanka does not regard India as an old reliable. Prime Minister Ranil Wickremesinghe says that Indian aid is not charity.

So, with no trusted aid donors, Sri Lanka will take help from wherever it comes. More than four decades of strong strategic and economic ties have left China in a strong position in Sri Lanka and, perhaps, it is able to dictate terms to Colombo.

Having received more from China than India over a long period, Sri Lanka wants India to avoid a major diplomatic row over the Yuan Wang. “Sri Lanka is a small country, and Sri Lanka has very good friendship with everyone,” said Harin Fernando, Sri Lanka’s tourism minister, during a visit to India recently. “There is a lot of investment by the Chinese in Sri Lanka. I am sure India understands that. We have a very good diplomatic relationship with India,” he added. On August 26, Sri Lanka’s High Commissioner to India, Milinda Moragoda, called on India to build a ‘framework’ on how to deal with maritime security concerns in the future and to avoid a trust deficit.

He is right, but his words imply that India continues to face tough competition from China in Sri Lanka. And China’s latest allegation — about ‘rude interference’ from ‘third parties’ in Sri Lanka and that the country has overcome ‘aggression by (its) northern neighbour’— highlights the necessity of India moving very quickly, deftly and generously to regain and consolidate some military and economic influence in Sri Lanka. 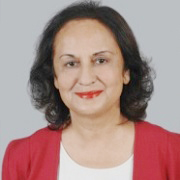 Anita Inder Singh is a cross-disciplinary writer on world affairs. She is the founding professor, Centre for Peace and Conflict Resolution, New Delhi. Her books include Democracy, Ethnic Diversity and Security in Post-Communist Europe (Praeger, USA, 2001); her Oxford doctoral thesis, The Origins of the Partition of India, 1936-1947, also published as one of the four classic works on the Partition in The Partition Omnibus (Oxford University Press, 2002, paperback 2004), The Limits of British Influence (1992 New York and London) and The United States, South Asia and the Global Anti-Terrorist Coalition (2006).