It is a centuries old truth that ‘an apple a day keeps the doctor away’ but in the Indian Occupied Kashmir, the administrative authorities are trying their utmost to keep the apples away from the people.  For the last many months, the people of the Indian Occupied Kashmir are protesting that the Indian authorities are stopping their apple-laden trucks on the highways to India. In the name of security checking, the highway-police halts those trucks for days and days on the way and as a result of it, the apples get rotten.

Apple-growers of the Indian Occupied Kashmir say that it all is being done just to push them into an inferno of financial loss. They say that they don’t have any industry based financial activity or manufacturing units in their area and the only source of income for the local people is nothing but producing and selling the fruit specifically the apples. The BJP government thinks that by keeping the people of Kashmir engaged in ‘bread and butter’ related problems and by depriving them of all sources of earning, it can crush the desire as well as the struggle for independence in Occupied Kashmir.

Though China is the most prominent rather leading producer of Apples all over the world but Kashmiri Apples have a unique taste and a particular colour of their own and are considered the backbone of Kashmir’s Income. Experts say that the Kashmir Valley produces over 22 lakh metric tons of apple which is more than 70 per cent of the total apple production in the country. Besides halting the transit passage of apples from Occupied Kashmir, the government of India has managed to promote the import, legal as well as illegal, of apples from Iran. The growers of apples in Occupied Kashmir say that their produced fruit is already facing threat due to the Iranian apple invasion into the Indian market and the artificially created hurdles by the Indian government in transportation of their fruit is posing a serious challenge to them. Now they are so helpless that they could do nothing but protest.

The Aljazeera published a report on this situation in the last week of September which refers to the statement of a major union leader who said that thousands of trucks carrying apples of millions of dollars’ worth have been stopped on the highway. “The government says it all is because of routine construction work on the highway but the facts are otherwise. The government has ill-willingly planned this road-work in the days when this route is used for transportation of apples”, said another desperate grower. He further said talking to the media, “Highway repairs are causing extensive delays along the Srinagar-Jammu highway, which connects the disputed region to the rest of India, meaning huge losses.”

According to the Kashmir Media Service the government of India is not only creating hurdles for the trucks carrying Kashmiri apples via high-ways but on the bypass routes also. These routes include Mirbazar-Ashajipora road, Dooru-Verinag Road and Dalwach-Mehmoodabad road via Qazigund. The Indian authorities have imposed ban on the movement of heavy goods vehicles on all these three inner routes. The only purpose behind is to give the Kashmiri apple growers a real tough time and bar them from sending their fruit to the Indian central market.

The plan of snatching a better source of income from the people of the Indian Illegally Occupied Jammu and Kashmir is not limited to halting the fruit laden trucks on the highways and bypasses; there are some other cruelly inhuman measures also adopted by the Indian authorities; felling of grown up apple trees is also one of such measures. According to media details, farmers in Jammu and Kashmir are crying out in despair as the National Highways Authority of India has uprooted and felled trees from their orchards in order to build new roads. After abrogation of Article 370, land has been acquired rather grabbed from the farmers on the basis of laws that have been repealed.

Farmers are protesting that they have not been compensated according to current market rates. Mohammad Afzal, an apple-grower said talking to Raja Muzaffar of DownToEarth , “My 20 to 25-year-old fruit trees uprooted by the government would have given me livelihood for the next 20 to 30 years. But they were murdered mercilessly. Around mid-day on March 30, 2022, the earth movers of NKC Projects Pvt. Ltd, assisted by the site engineer of NHAI and the officials of land-record trespassed into our farm and started uprooting fruit trees which included plum, pear, apple and quince. The local police were also accompanying them.”  He added that all the uprooted trees were in full bloom, with huge flowers and were supposed to yield a bumper crop this season.

Reports say that some 600 acres of agricultural land has been acquired for a 62-kilometre highway connecting Pulwama with Ganderbal via Budgam as part of the Srinagar Ring Road project. This is the area which has apple-trees in abundance and designing the ring-road this way means there would remain not even a single apple tree in the area. The government of India is misguided by the thought that after being deprived of their basic source of income, the people of the valley would get engaged in searching for some other financial resources to earn their bread and in this way their attention from the independence movement would be diverted. But things are altogether different rather opposite to the ‘dream’ of the Indian government. This cruel decision of felling the apple-trees has made the people more aggressive and determined against the Indian atrocities in the valley. The point ignored by the Indian authorities is that ‘A hungry tiger fights fierce’. 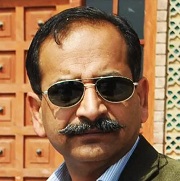