The Indian security establishment and media had gone tizzy with the Yuan Wang 5’s visit to Hambantota in Sri Lanka. The media was abuzz with many comments based on figments of imagination on the subject. The aim of this article is to dispel such false notions/interpretations based on legal provisions in the United Nations Convention on the Law of the Sea (UNCLOS), bilateral agreement between India and Sri Lanka and the basic tenets of submarine operations.

Myth 1: This visit is in violation of the clause in the India Sri Lanka peace accord of 1987 that a military vessel cannot berth in Sri Lanka without New Delhi’s consent.

First, there is no such clause in the agreement which primarily deals with the understanding between India and Sri Lanka on tackling the civil war then involving the Sri Lankan establishment and the Tamil Tigers.

Second, Sri Lanka is a sovereign nation, and it is well within its rights to permit any warship or any military support vessel to berth in their ports based on a diplomatic clearance.

As a diplomatic courtesy, New Delhi was informed of the visit.

Third, this is peace time and there is no hostility in the region which should have raised a question mark on the Chinese vessel’s itinerary.

Fourth, Sri Lanka had laid down two conditions to be followed by the Chinese vessel: The Vessel Automatic Identification System (AIS) was to be always kept on and that the vessel should not violate the Exclusive Economic Zone (EEZ) norms of Sri Lankan waters.

These conditions would have been agreed upon by the Chinese establishment and thus the vessel was permitted to enter Sri Lankan waters.

Myth 2: The ship entered Hambantota to spy on Indian military-related sensitive activities on the east coast.

The Chinese research vessel is a satellite uplink and down link ship.

The ship has adequate EW (electronic warfare) capabilities, and it can easily monitor the Indian coast while operating in international waters as per the provisions in the UNCLOS.

She does not have to enter a port in Sri Lanka to fulfill this mission.

It may also be noted that Chinese research vessels have been operating in the Indian Ocean routinely and this is not the first occasion.

Myth 3: The vessel has been deployed in the Indian Ocean to gather oceanographic data for submarine operations.

Research vessels are well within their rights to gather oceanographic data in international waters as per the provisions in the UNCLOS (Articles 55, 56, 75, 221(1)).

However, there are restrictions whilst operating in the EEZ of a coastal State who has special rights regarding the marine scientific research, exploration and use of marine resources including energy production.

The difference between territorial waters and the EEZ is that the former confers full sovereignty over the waters whereas the latter confers merely sovereign rights for the coastal state below the surface of the sea.

If the Chinese vessel adhered to these norms, it was not violating any international regulations and operating within the framework of the UNCLOS.

Myth 4: Oceanographic data which is collected by research vessels adds to the data bank and could be interpolated for submarine deployment.

This data which is referred to is primarily the temperature profile visa vis the depth of water in an area which is useful for strategic deployments of submarines.

Further, this information is more theoretical as the underwater medium is dynamic in nature and the data pertains to the time and date when it was collected.

Hence other than interpolating certain theoretical inferences, this data is of little practical utility for submarine deployment.

Moreover, in real time a submarine commander would ascertain the temperature layer in his patrol area and assess the situation before adopting the tactics to be employed notwithstanding the information available in the data bank.

As far as this vessel is concerned, the primary role is the tracking and support of satellite and intercontinental ballistic missiles as per directions of China’s People’s Liberation Army Strategic Support Force.

The vessel can also be deployed for other research activities like space tracking and satellite operation monitoring.

It may also be noted that the sequence of events that preceded the ship’s arrival clearly indicate that there have been extensive deliberations between all stakeholders prior to the government of Sri Lanka permitting this vessel to berth at Hambantota.

In this context, it is important to note that in the current crisis, Sri Lanka must depend on China to a large extent notwithstanding assistance from India, US, Japan and the IMF bailout.

Talks between China and Sri Lanka are in progress to work out a favourable debt restructuring which is also a pre-condition for an IMF bailout.

For this, Colombo will need to toe Beijing’s line which could have been a major factor to permit berthing of this vessel and in such a situation India needs to display diplomatic forbearance.

It appears that New Delhi has clearly taken a balanced view in this case.

Lastly, while the actual mission of the Yuan Wang 5 is not known, it is quite possible that she has been deployed for a genuine space-related assignment.

The article was originally published on rediff.com 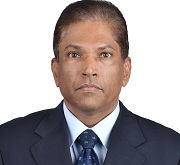 Commodore Venugopal Menon served in the Indian Navy for 29 years in operational roles, including commands at sea, and training and staff assignments at Naval HQ. In addition to the staff and war courses in the Indian Navy, he underwent the executive course at the Asia Pacific Centre for Security Studies, Honolulu.