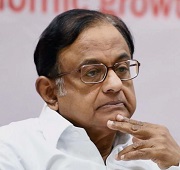 P. Chidambaram served as the former Member of Parliament and Union Minister under Manmohan Singh's government. He served as the MP of Sivaganga for seven terms. He also served as finance minister following the departure of Pranab Mukherjee from the post. He was a stalwart member of INC until he quit the Congress party in 1996 and joined a breakaway faction of the Tamil Nadu state unit of the Congress party called the Tamil Maanila Congress (TMC).

The Hijab: To wear, or not to wear, that is the question.

The question was answered by two Honourable Judges of the Supreme Court but, at the end of the day on October 13, there were two Opinions, but no Answer. As a result, Ms Aishat Shifa and Ms Tehrina Begum, born and raised in a small town called Kundapura, district Udupi, Karanataka, are unable to resume their studies in Government Pre-University College, Kundapura.

Both students were in the second year. Since the day they had joined the college in the previous year, they had worn the hijab — a scarf that covered the head and neck but left the face visible. The hijab was worn in addition to the prescribed uniform.

On February 3, 2022, they were stopped at the gate and told that they would have to remove the hijab before entering the college. They refused, they were denied entry, and that is where the matter stands eight months later.

Hijab is no different

A woman wearing the hijab causes no offence to anybody. It is not against public order, decency, morality or health. Irrespective of the religious significance, a woman wearing the hijab is not very different from women in India who cover their head with the pallu of their sari or a duppatta. Men wear turbans. Sikh men cover their heads with a pagari. Many states of India have distinctive headgear worn on special occasions (e.g. the Mysuru peta).

What is the central issue of the controversy? Amidst the screaming headlines, the cacophony on television, the flood of comments, trolls and memes in the social media and the lofty pronouncements of worthy leaders, the central issue has been lost. In my view, the issue boils down to one word: CHOICE.

There are two approaches to the question of ‘choice’ concerning wearing of the hijab. I may illustrate the two approaches by quoting from the opinions of the two honourable judges, Justice Hemant Gupta and Justice Sudhanshu Dhulia:

Justice Dhulia: “Whether wearing hijab is an essential religious practice or not is not essential for the determination of this dispute. If the belief is sincere, and it harms no one else, there can be no justifiable reasons for banning hijab in a classroom.”

Justice Gupta: “… the decision of the state government mandating the College Development Committee to ensure the students wear the uniform as prescribed does not violate the freedom guaranteed under Article 19(1)(a), rather reinforces the right to equality under Article 14.”

Justice Dhulia: “Asking a pre-university schoolgirl to take off her hijab at her school gate is an invasion of her privacy and dignity. It is clearly violative of the Fundamental Right given to her under Articles 19(1)(a) and 21 of the Constitution.”

Justice Gupta: “Therefore, the Preambular goal of justice, liberty, equality or fraternity would be better served by removing any religious differences, inequalities, and treating students alike before they attain the age of adulthood.”

Justice Dhulia: “This is the time to foster in them sensitivity, empathy and understanding towards different religions, languages and cultures. This is the time when they should learn not to be alarmed by our diversity but to rejoice and celebrate this diversity.”

Justice Gupta: “If they choose not to attend classes due to the uniform that has been prescribed, it is a voluntary act of such students and cannot be said to be in violation of Article 29 by the state.”

Justice Dhulia: “If she wants to wear hijab even inside her classroom, she cannot be stopped, if it is worn as a matter of her choice, as it may be the only way her conservative family will permit her to go to school, and in those cases, her hijab is her ticket to education.”

Some commentators have complained that when there is a movement for shedding the hijab in conservative Iran, it is surprising that a section of the Muslim community should defend the right of girls to wear the hijab in classrooms in modern India. The criticism is completely misplaced. On a closer look, the controversy is the same in both Iran and India: it is about ‘choice’. It is like the controversy in America over the woman’s choice of abortion.

The controversy is between ‘Choice’ and ‘Rule’. ‘Choice’ represents freedom, dignity, privacy and diversity. ‘Rule’ is often a product of majoritarianism, intolerance and drive for uniformity.

‘Choice’ will yield to ‘Rule’ in certain situations that attract the grounds contained in Article 19(2) or Article 25(1) of the Constitution — public order, decency, morality and health — and in certain other provisions of Part III of the Constitution (fundamental rights). Absent such grounds, ‘Choice’ must prevail.

Justice Sudhanshu Dhulia upheld ‘Choice’ because the hijab may be the girls’ only ticket to education. Justice Hemant Gupta upheld the ‘Rule’ although the state showed no compelling necessity.

Let the larger Bench of the Supreme Court lay down the law. Meanwhile, each one of you must decide whether you stand with ‘Choice’ or ‘Rule’.

Readers will recall the three words Sovereign, Secular and Democratic in the Preamble to the Constitution of India. They are the defining qualities of a modern republic. India won its freedom on August 15, 1947, in order to establish such a republic.

For centuries, most parts of India were sovereign only in the sense they were not ruled by foreign kings and queens. The state was ‘sovereign’ but the people were not. Several rulers were despots, incompetent and did little to improve the lives of the people.

Under a republican Constitution, it is not only the State that is sovereign, the people are also sovereign. The power to change the rulers is the hallmark of a sovereign people. Free and fair election is the sovereign right of the people. However, in recent years, that has come under a cloud. Elections, nowadays, seem to be largely determined by money and it is the BJP which has the largest amount of money. In fact, the BJP government invented a diabolically clever and opaque instrument (Electoral Bonds) to garner nearly 95 per cent of the money donated to political parties. The BJP has also other instruments to win elections: media that is tamed, institutions that are captured, laws that are weaponised and agencies that are suborned. And if the BJP loses an election, it has the ultimate weapon called Operation Lotus that it shamelessly employed in Goa, Manipur, Arunachal Pradesh, Meghalaya, Karnataka and Madhya Pradesh and attempted in Rajasthan.

Will we reach a point when elections cease to be free or fair? I sincerely hope not, but that danger cannot be ruled out altogether. Congress-mukt Bharat is not a bullet aimed at the Congress alone. Mr J P Nadda’s recent statement that “small parties will vanish leaving only the BJP as a national party” is more than the usual political rhetoric; it is an idea that is carefully nurtured in the BJP nursery.

The people will not lose their sovereignty in a flash. It will be like the spread of slow poison. The erosion will begin by depriving, bit by bit, personal liberty, freedom of speech and writing, right to dissent, right to protest, privacy, freedom to travel and, ultimately, freedom from fear. Ask yourself, in which direction is India headed?

India will be the most populous country in a few years and the population will peak at 160 crore. Since fertility rates are converging, the religious composition of the population will not change significantly from the current proportions: Hindu 78.4 per cent, Muslim 14.4, Christian 2.2, Sikh 1.7 and others 3.3. For 2,000 years India was a plural country and, today, India is a plural country, but we seem to be in an overdrive to deny our pluralism. On the contrary, the US, Canada, Australia and New Zealand, among others, proudly acknowledge the huge benefits of having a plural society. Their institutions including courts, media and universities, actively seek and promote diversity in their ranks. Currently, there is one honourable judge each from the Muslim and Christian communities in the Supreme Court and none from the Sikhs. There is an apprehension that another Muslim or Christian judge may not be appointed until after the incumbent retired.

Ask yourself, can India be anything but secular? Our music, literature, cinema, sports, science, medicine, law, teaching and civil services will be poorer if we exclude Muslims and Christians. It is the leaders of the BJP and the RSS who gave a bad name to secularism. They called it ‘appeasement’, and that has distorted their outlook and policy on Jammu & Kashmir, electoral representation, reservations, language, food habits, clothes, and personal law. The death of secularism and the declaration of a Hindu rashtra (nation) will be a body blow to the idea of India and may hasten the death of democracy itself. The overwhelming majority of Indians does not wish that outcome, but the overwhelming majority of BJP supporters seem to want a Hindu rashtra. When an irresistible force (the Hindutva believers) meets an immovable block (the moderate and tolerant Indians), I do not know which will prevail.

Democracy is not just voting once every five years. Democracy has to be practised every day through dialogue, discussion, debate and dissent. By that standard, democracy in India is gasping for breath. There are fewer days every year on which Parliament and the Legislative Assemblies meet. The Sweden-based V-Dem Institute called India an “electoral autocracy” and lowered India’s rank to 53 in the Democracy Index 2021. Each state party fights for its space in its home-state but is loath to help other state parties to protect their spaces or to join forces to fight the BJP. Nightmarish as it may seem, we cannot rule out the emergence of a one-party system (as Mr Nadda devoutly wishes). His party will claim we are a democracy but with Indian characteristics!

Tomorrow, when you salute the Tricolour, please remember its designer, Pingali Venkayya, and that, in the current political context, the tri-colour represents sovereignty, secularism and democracy.