On Friday 5 August 2022, Israel, planted in Palestine in violation of all laws, norms, moral principles and by means of bribery, blackmail and massacres, launched its latest savage multiple air strikes on Gaza.
Within 72 hours 45 innocent Palestinians, including 15 children- one a five year old-were slaughtered, buildings bombed and destroyed, water and electricity supplies disconnected causing immeasurable hardships to the poverty-stricken Palestinians who survive on aid.

Israel’s stated target was senior Islamic Jihad commander Tayseer Al-Jaabari who was killed along with several civilians, including five-year-old Alaa Qaddoum and her father, who lived in the apartment next to Al-Jaabari’s.

Israel’s attack on Gaza was unprovoked and there was no evidence to support the contention that Jabari was preparing an attack on Israeli tanks. Narrating Israel’s heartlessness columnist Maha Hussaini said that ’Sixteen Palestinian children who were slaughtered were looking forward to a summer filled with joy. They planned to play football, head to the beach and attend summer camp.

Columnist Ahmed al Sammak cited an incident where Israel has lost all sense of human values;
“Mohammed’s family had their last dinner at 8.45pm on Saturday. Ahmed al-Nairab, 11, and his five-year-old brother Momen then asked their father, Mohammed, to take them to the small grocery store next to their house .At the shop they bought crisps and gum. Then Mohammed al-Nairab saw a huge ball of fire and heard a massive explosion. “I couldn’t see anything. When the smoke started to disappear, I found Momen lying on the ground, covered with blood,” the 38-year-old father told Middle East Eye. “I bore him quickly in my arms and started running to find a car or ambulance. After many metres, I found Ahmed also lying on the ground.

Israel could commit these crimes due to the blind support of US,UK and Europe besides the indifference of Arab dictators . The United Arab Emirates, Bahrain and Morocco who have signed normalization pacts with Israel since 2020, have refused to condemn.

United Nations which created this Nazi style monster remain paralyzed due to super power pressure. In his s article British journalist David Hearst said there can be no clearer demonstration of the hollowness of western values than in the persistent, cynical and criminal failure to bring Israel to book for its actions.
US President Joe Biden’ said “ Israel has its right to defend itself .My support for Israel’s security is long-standing and unwavering — including its right to defend itself against attacks,” Instead of condemning British Prime Minister Boris Johnson too said Israel has the right to defend itself.

Britain’s prime minister to be, Liz Truss said: UK stands by Israel and its right to defend itself.” To rub salt into the wound, Truss promised to review the location of Britain’s embassy, which is currently in Tel Aviv – an act which would consign what small role the UK had as a peacemaker or mediator in this conflict to the ashes.

What they all fail to understand is that Palestinians cannot be wiped out. They are as globally connected as any other generation of youths around the world. What exactly is the message world leaders are giving them in their fact-free reactions to the latest bombardments?

Statistics tell a dire story of life in Gaza today:
*around two-thirds of the Palestinian population of Gaza are refugees, with over 500,000 living in eight refugee camps across the Gaza Strip, in some of the highest population densities in the world
*97% of Gaza’s water is undrinkable, and contaminated water is poisoning people
*people in Gaza receive a daily average of 12 hours of electricity supply and are subject to rolling power cuts
*healthcare services in Gaza are in perpetual crisis, starved of power, vital equipment, staff and essential medicines
*39% of patients needing specialist care in the West Bank or Israel were denied or delayed permission to leave Gaza by Israel.
*the unemployment rate is 46.6%, and over 62% for young people
*four in five children in Gaza report living with fear, grief and depression, often manifesting in self-harm
*tens of thousands are displaced within Gaza due to the bombardment and ruin of their homes.

Summing up the situation in an article titled “As Israel was killing civilians in Gaza, the hypocritical world stood by and watched” columnist Motasem A Dalloul
Abujomaa had this to state ;

The Gaza Strip does not pose any strategic threat to Israel’s security; it is a very small coastal enclave that can be — and is — controlled and choked very easily. This has been happening for sixteen years, with Israel and Egypt imposing a strict land, air and sea blockade; their intelligence agencies know everything going in or coming out.

It was no surprise, though, to see Israel pounding Gaza yet again in an endeavour to destroy infrastructure and kill civilians. This has become the norm. Innocent civilians are regarded as expendable in order to kill one or two key people.

Does anyone care? Obviously not. This didn’t, after all, happen in Ukraine. Where are the sanctions on Israel — for 70+ years of ethnic cleansing, massacres and violations of human rights — of the kind that were slapped on Russia within days of its invasion of Ukraine in February? The double standards are obvious. As Israel was killing civilians in Gaza, the hypocritical world just stood by and watched. And not for the first time.

“Every single escalation of violence in Gaza comes at the cost of ordinary people,” said the Norwegian Refugee Council’s Middle East Regional Director Carsten Hansen. “…Innocent children and families have been caught up in the vicious circle of violence for as long as they can remember. Many in Gaza are still recovering— both psychologically and physically — from last year’s eleven-day crisis.”

However, the Biden administration in Washington, which has provided military and humanitarian aid worth billions of dollars to Ukraine, does not care about Gaza. Instead, it gives the apartheid state of Israel at least $3 billion in military aid every year.

Europe has largely remained silent in the face of Palestinian blood being spilt indiscriminately by Israel. It was as if there was nothing happening in Gaza. Are Europeans so inured to seeing Palestinians being slaughtered by Israel simply for rejecting the Zionist occupation of their land?

What about the Arab leaders? They profess “brotherhood” with the Palestinians, but either kept quiet or issued shy condemnation of the Israeli crimes. Nor did they pledge a penny for their new best friend’s victims. Only the Qatar Red Crescent Society has pledged humanitarian aid.

The not-so-hidden consensus in the international community appears to be that the Palestinian people must be eradicated in order to let Israel’s settler-colonial occupation take over all of historic Palestine: Greater Israel is Zionism’s objective and nothing must stand in its way. Those states which do raise their voices in support of the Palestinians, but take no action against the occupation state, are compounding their hypocrisy.

Latheef Farook began his journalistic career with the now defunct Independent Newspapers in 1966 before joining the Lake House Group of newspapers in 1971 where he worked with the Ceylon Daily News and the evening daily Ceylon Observer covering local politics and foreign affairs besides finance and economic sectors. Later he joined the Gulf Times and Khaleej Times where he covered contemporary issues in the region. He has authored and published several books including, India lost Kashmir and Foreign Presence in Sri Lanka.

As blood-red lighting stained the backdrop, the dark black sky rendered an eerie aura of despotism. Members of the military stood guard clutching their

A Tribute to Winifred

by It is not so conventional for a husband to write an eulogy or memorial for his wife. However, we have not been very 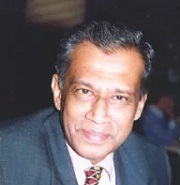 Latheef Farook began his journalistic career with the now defunct Independent Newspapers in 1966 before joining the Lake House Group of newspapers in 1971 where he worked with the Ceylon Daily News and the evening daily Ceylon Observer covering local politics and foreign affairs besides finance and economic sectors. Later he joined the Gulf Times and Khaleej Times where he covered contemporary issues in the region. He has authored and published several books including, India lost Kashmir and Foreign Presence in Sri Lanka.