A month ago, I paid a short but productive visit to the Eastern Province of Sri Lanka, bringing to the students of two local schools and residents of two villages rice, stationery, fuel and solar street lampsdonated by China, and having a good talk with the Hon. Governor Anuradha Yahampath and local civil society representatives. I learned a lot during this visit at the local communities. On one hand, I can better feel for the hardship that local people is enduring that makes me keep thinking about how we can do more to help them. On the other hand, I did feel how deep-rooted the China-Sri Lanka friendship is and how eager the people of the Eastern Province are for achieving development. In this regard, China has both willingness and ability to help them live a better life at an early date.

What left the deepest impression on me was Kaluwankerny, a remote fishing village with a nearly 50 minutes’ drive from the town of Batticaloa. This village has been hit hard by COVID-19 pandemic, economic crisis, and grave poverty. I visited several families in the village andfound out that only one of them had a bed. Many families had no choice but to live in thatched shacks.The Eastern Province was caught in a rare rainstorm in those days, which added to the hardships of the villagers who live in shacks and make a living out of fishing. Fortunately, the Chinese Embassy had funded the building of several brick houses for the village, giving shelter for many villagers against wind and rain.During this visit, I was heartened by the villagers who were not overwhelmed by poverty. When they were standing in muddy road and welcoming me at the village entrance, all I saw were smiling faces and when we were talking together under the simple awning, I could feel their aspiration for a better life, not to mention the great vitality in the clear eyes of the village kids. I believe their future must be full of hope!Moving from thatched shacks to brick houses, getting rid of poverty and living a better life is not mission impossible, but a real story that has happened countless times in China.

Under the leadership of the Communist Party of China, China has won the largest battle against poverty in human history. In the past decade, a total of 128,000 impoverished villages and close to 100 million poor rural residents have been lifted out of poverty. A total of 1.1 million km highways has been reconstructed in the rural arears. More than 9.6 million poverty-stricken people have moved into new resettlement houses. Millions upon millions of children from poor families have fair access to education. With all these achievements, local people’s live have undergone tremendous changes. The fact that China eradicated absolute poverty, finished building a moderately prosperous society in all respects, and thus completed the First Centenary Goal has become a major eventof great immediate importance and profound historical significance. In the progress of advancing rural revitalization across the board, people in China’s rural areas will surely lead a better life.

China’s experience in poverty alleviation indicates that poverty is not unconquerable. By applying the people-centered philosophy, highlighting poverty alleviation as top agenda of governance and eradicating poverty through development, huge number of villages in China had successfully got rid of poverty and even become rich. We would like to share experiences with Kaluwankerny residents and more Sri Lankan friends and provide necessary support to help them live an ideal life as early as possible. As China believes that one swallow does not make a summer, building a human community with a shared future is the way forward for all the world’s peoples.

The world today is undergoing momentous changes unseen in a century. The world economy is in face of serious challenges and the geopolitical environment remains tense. Food and energy crises are compounded with one another. Factors of instability, uncertainty and unpredictability are mounting in the international landscape. Faced with these challenges, it is imperative that all countries advocate peace, development, and win-win cooperation and embrace the vision of a community with a shared future for mankind. As a responsible major country with a global vision, China will continue to promote all parties to replace division with unity, confrontation with cooperation, and exclusion with inclusiveness, and join hands to solve the common challenges of humanity and create a better future together. China, as Sri Lanka’s good and genuine friend, will continue to contribute to Sri Lanka’s early recovery and development. We welcome more Sri Lankan friends to communicate with the Chinese embassy so that we can better understand your difficulties and help you in urgent need.

Finally, I would like to share some good news with Eastern Province friends. First, the Chinese Embassy has funded the building of another batch of brick houses in Kaluwankerny so that more villagers will be able to bid farewell to their shacks. The second good news is for the residents of Morawewa, the other village I visited. To solve your difficulties in gaining access to drinking water, the Embassy has decided to provide financial support for constructing well and laying water pipes in the Division.Last but not least, China and the Eastern Province of Sri Lanka are exploring more cooperation in areas such as agriculture, fisheries, tourism and education. We never pay lip service when it comes to China-Sri Lanka friendship. We are willing to work together with all walks of life in Sri Lanka with concrete actions, to bring more benefits to people of all ethnic groups of the two countries. 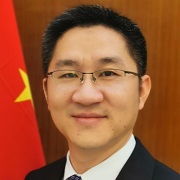