Days Later I Was In Botswana, with Chels. We went to stay with Teej and Mike. Adi was there too. The first convergence of those four special people in my life. It felt like bringing Chels home to meet Mum and Dad and big bro. Major step, we all knew.

Luckily, Teej and Mike and Adi loved her. And she saw how special they were too.

One afternoon, as we were all getting ready to go for a walk, Teej started nagging me.

And sunscreen! Lots of sunscreen! Spike, you’re going to fry with that pale skin!

All right, all right.

It just flew out of my mouth. I heard it, and stopped. Teej heard it and stopped. But I didn’t correct myself. Teej looked shocked, but also moved. I was moved as well. Thereafter, I called her Mom all the time. It felt good. For both of us. Though I made a point, always, to call her Mom, rather than Mum.

There was only one Mum.

A happy visit, overall. And yet there was a constant subtext of stress. It was evident in how much I was drinking.

At one point Chels and I took a boat, drifted up and down the river, and the main thing I remember is Southern Comfort and Sambuca. (Sambuca Gold by day, Sambuca Black by night.) I remember waking in the morning with my face stuck to a pillow, my head not feeling like it was fastened to my neck. I was having fun, sure, but also dealing in my own way with unsorted anger, and guilt about not being at war—not leading my lads. And I wasn’t dealing well. Chels and Adi, Teej and Mike said nothing. Maybe they saw nothing. I was probably doing a pretty good job of covering it all up. From the outside my drinking probably looked like partying. And that was what I told myself it was. But deep down, on some level, I knew.

Something had to change. I knew I couldn’t go on like this.

So the moment I got back to Britain I asked for a meeting with my commanding officer, Colonel Ed Smyth-Osbourne.

I admired Colonel Ed. And I was fascinated by him. He wasn’t put together like other men. Come to mention it, he wasn’t put together like any other human I’d encountered. The basic ingredients were different. Scrap iron, steel wool, lion’s blood. He looked different too. His face was long, like a horse’s, but not equine smooth; he had a distinctive tuft of hair on each cheek. His eyes were large, calm, capable of wisdom and stoicism. My eyes, by contrast, were still bloodshot from my Okavango debauch, and darting all around as I delivered my pitch.

Colonel, I need to find a way of getting back onto operations, or else I’m going to have to quit the Army.

I’m not certain Colonel Ed believed my threat. I’m not certain I did. Still, politically, diplomatically, strategically, he couldn’t afford to discount it. A prince in the ranks was a big public-relations asset, a powerful recruiting tool. He couldn’t ignore the fact that, if I bolted, his superiors might blame him, and their superiors too, and up the chain it might go.

On the other hand, much of what I saw from him that day was genuine humanity. The guy got it. As a soldier, he felt for me. He shuddered at the thought of being kept from a scrap. He really did want to help.

Iraq was permanently off the table, he said. Alas. No two ways about that, I’m afraid. But maybe, he added, Afghanistan was an option.

He muttered something about it being “the safer option.”

What on earth was he banging on about? Afghanistan was worlds more dangerous than Iraq. At that moment Britain had seven thousand soldiers in Afghanistan and each day found them engaged in some of the fiercest combat since the Second World War.

But who was I to argue? If Colonel Ed thought Afghanistan safer, and if he was willing to send me there, great.

What job would I do in Afghanistan, Colonel?

Highly sought-after job, he explained. FACs were tasked with orchestrating all air power, giving cover to lads on the ground, calling in raids—not to mention rescues, medevacs, the list went on. It wasn’t a new job, certainly, but it was newly vital in this new sort of warfare.

Because the bloody Taliban is everywhere! And nowhere!

You simply couldn’t find them, he explained. Terrain was too rugged, too remote. Mountains and deserts honeycombed with tunnels and caves—it was like hunting goats. Or ghosts. You had to get the bird’s-eye view.

Since the Taliban had no air force, not one plane, that was easy. We British, plus the Yanks, owned the air. But FACs helped us press that advantage. Say a squadron out on patrol needed to know about nearby threats. The FAC checked with drones, checked with fighter pilots, checked with helicopters, checked his high-tech laptop, created a 360-degree picture of the battlefield.

Say that same squadron suddenly came under fire. The FAC consulted a menu—Apache, Tornado, Mirage, F-15, F-16, A-10—and ordered up the aircraft best suited to the situation, or the best one available, then guided that aircraft onto the enemy. Using cutting-edge hardware, FACs didn’t simply rain fire on the enemy’s heads, they placed it there, like a crown.

Then he told me that all FACs get a chance to go up in a Hawk and experience being in the air.

By the time Colonel Ed stopped talking I was salivating. FAC it is, sir. When do I leave?

FAC was a plum job. Everyone wanted it. So that would take some doing. Also, it was a complex job. All that technology and responsibility required loads of training.

First things first, he said. I’d have to go through a challenging certification process.

Copyright © 2023 by Prince Harry, The Duke of Sussex 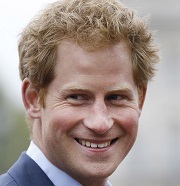 Prince Harry, The Duke of Sussex, is a husband, father, humanitarian, military veteran, mental wellness advocate, and environmentalist. He resides in Santa Barbara, California, with his family and three dogs.