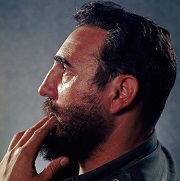 Fidel Castro is the former Prime Minister (1959-1976) and President (1976-2008) of Cuba. He was a noted revolutionary during the Cold War, the period from the 1950s to 1989 when the USA and the USSR fought for the supremacy of capitalism vs. communism. This war was never fought in the United States or the Soviet Union, but in smaller nations like Cuba to set up capitalist or communist governments.

Today, August 13, the world is celebrating the birth annivessary of Fidel Castro who needs no introduction. Following experts adapted from his book My Life.

In January 1959 you and your followers didn’t institute a policy of revolutionary change overnight; you began a sort of transition phase, isn’t that right?

We had already put in place a government. I had said that I had no desire to be president – I wanted to show that I hadn’t been in the struggle out of personal interest. We looked for a candidate, and we chose a magistrate who’d been against Batista, who’d actually acquitted revolutionaries who came before him in an important trial.

That’s right, Urrutia. He was highly respected. It’s a shame he didn’t have a bit less ambition and a bit more humility and common sense.

You didn’t want to be president at that moment?

No, I had no interest in being president. What I wanted to pursue was the Revolution, the army, the development of our heroic Rebel Army. I mean, an election might come along at some point and I might run, but I wasn’t really thinking about that at the time. I was interested in the laws that the Revolution would put in place, and in the application of the Moncada programme.

In other words, you waged that entire war with no personal desire to become president immediately afterwards?

I can assure you that that was the case, yes. Other factors may have come into play besides disinterestedness; there may have been a bit of pride, something

of that sort, but the fact is, I wasn’t interested. Remember, I’d been as good as dead for a long time. I was fighting to bring about a revolution, and titles weren’t important to me. The satisfaction of the struggle, pride in the struggle and its eventual success, victory, is a prize much greater than any government position, and when I said I wasn’t interested in being president, I did so after great deliberation. Our movement supported Urrutia for president, and we respected its decision. He and the 26th of July Movement, together, made the appointments to the cabinet, and there were those in the leadership cadre of the 26th of July Movement who were from the upper-middle class, even pretty right-wing, who’d joined us along the way, and others from the Left.

Some of them have written their memoirs, and many of them remained with the Revolution afterwards. They’ve had very interesting things to say, and they’ve been honest about what they thought, their discussions [perhaps ‘arguments’] with Che and Camilo.

Did Che mistrust some of those leaders?

Che was very suspicious and very mistrustful of some of them, because he’d seen some problems during the strike in April 1958 and he thought that some of the members of the 26th of July Movement whom he’d talked to in Villa Clara during the war were incorrigibly bourgeois. Che was very much in favour of agrarian reform, and some of the others kept talking about a very moderate reform, with indemnifications and compensations and that sort of thing.

Che, nevertheless, was in favour of unifying all the revolutionary forces. On the other side there was a lot of anti-Communism; it was strong and influential, and Che rejected it. Here in Cuba, during the McCarthy era, things were pretty venomous; there was prejudice everywhere, in all the media. And to add to the anti-Communism of quite a few people, with their bourgeois and petit-bourgeois background, there was also sectarianism among many Communists.

No, the Communists, the people in the PSP [Popular Socialist Party].1 Because also, in a way, within the leadership sectarian methods and habits had evolved.

That party always maintained good relations with me, and later with the 26th of July Movement. It was in their bookstore on Calle Carlos III that I bought most of the classics of Marxist literature I read when I was a student.

When our movement, which had been born after the coup, was organized and launched its attack against the Moncada barracks complex in an attempt to bring down that spurious regime that was detested by the immense majority of the population, it did so in absolute secrecy, as an action of that sort can only be carried out. I’ve talked about this. In the subsequent repression, several Communist leaders, among them Lazaro Pena, were arrested by the repressive forces, which were looking for Bias Roca. Bias Roca, who happened to be in Santiago, had left the day before 26 July. In the same cell block where I was isolated in a cell with iron bars, I saw Lazaro Pena walking down the hallway with that noble, dignified expression on his face – he’d been unjustly accused of being an accomplice in the assault. Some leftists, outside the country, were talking about a putsch. I can’t blame them, because no one can know the private thoughts of those who carry out such actions, nobody is in a position to know that a new tactic had emerged, of the thousand and one kinds of fighting that can be used to change a society. When those of us in our group were out on the street again – we’d been released due to public pressure – we renewed our contacts with our former Communist companeros in the struggle for university autonomy. Flavio Bravo, former member of the directorate of the PSP youth, was my contact. In fact, the 26th of July Movement and the PSP were allies, and they had known about our plan to flee to Mexico, so the upper ranks of the Party directorate knew our plans and in principle were in agreement with them; certainly they wanted to maintain contact and continue to cooperate in the fight against tyranny.

The year 1956 passed. In Mexico we had serious problems, and many of us were even arrested. The situation in Cuba was still not critical. In the classic theses of the Communist movement, revolutionary action should always be preceded by great economic and financial crises. The conditions in that second half of 1956 didn’t seem to be terribly favourable for a revolution to break out. Flavio Bravo visited us in Mexico. He brought us the opinion of his party’s leadership and asked us to postpone our action. Flavio was like a brother. We may have given too much importance to our own vow that in 1956 we would either be free or be martyrs. But no one renounces what he believes in, and I believed in what we were doing.

We left [Mexico], we disembarked [in Cuba], and three days later we had that terrible setback in Alegria de Pio. I’ve already told you that story. A fierce wave of persecution was unleashed against the dispersed expeditionaries: many were murdered. The Communists denounced and condemned the murders. The tyranny, emboldened, sated its hatred by murdering a great many revolutionaries in December, among them several Communist union leaders.

All seemed lost. Theories emerged as to the objective and subjective factors that had come into play, the causes of the difficulties – a leftist magazine not connected with the 26th of July Movement published all this – as told by one of the companeros who’d come over on the Granma and was currently in prison. During those extremely difficult days, up in the Sierra Maestra several of us survivors continued to believe that even under these circumstances we had to fight for a victory. Certainly in the case of our country, subjective conditions played a considerable role.

There came a moment when the survivors of the Granma, with the support of the campesinos and the young reinforcements from Manzanillo, Bayamo, Santiago and other places, sent in by Frank Pais and Celia Sanchez Manduley, managed to reconstruct our detachment, which, now experienced and battle-hardened, though still small, barely 250 men, was able to extend its operations, with four columns, almost to Santiago de Cuba, and to invade the large strategic eastern region of the island.

The historical leader of the Popular Socialist Party, Bias Roca, was a man from a very humble background. He’d been born in Manzanillo and was self-taught, but he was a tireless advocate of spreading Marxist-Leninist ideas and developing the Communist Party in Cuba. Bias Roca had had to live outside Cuba for some time, for obvious reasons. During that time, Anibal Escalante, as secretary of the Party, assumed the main leadership position. By the time of the triumph of the Revolution, he had great authority, and he acted as the virtual president of the Party. He was capable, intelligent and a good organizer, but he had the deeply rooted sectarian habit of filtering and controlling everything in favour of his Party. Those were the old tactics, the old obsessions, of a stage in the history of Communism – a ghetto mentality born of the discrimination, exclusion and anti-Communist feelings that people were subjected to for so long.

During the early days of the Revolution, once the war was over, they even did this with the 26th of July Movement, despite our excellent relations. These were misguided, mistaken methods, though used by unquestionably honourable, self-sacrificing people who were true revolutionaries and true anti-imperialists.

Following excerpts are adapted from the author’s new book, Spare, published by Penguin Random House. Days Later I Was In Botswana,

Following excerpts adapted from the author’s new book, “India Is Broken: A People Betrayed, Independence to Today,” published by Stanford

In Benjamin “Bibi” Netanyahu’s sweeping, moving autobiography, one of the most formidable and insightful leaders of our time tells the